James Owen Dorsey was born on October 31, 1848 in Baltimore, Maryland.

During his early years he took a religious path and was ordained as a deacon of the Episcopal Church in 1871.

In May, the Church sent James to the Dakota Territory as a missionary for the Ponka Indians. During his 27 months with the Ponka people he was able to learn Siouan Language extensively. However, due to illness Dorsey was forced to leave the West in August of 1873. He moved to Maryland and assumed the work of a perish. Although he left the west he still continued to study the and analyze the language of the Ponka. In July of 1878, Major Powell engaged Dorsey and had him return to Nebraska to continue his research of the aborigines, and repaired to the Omaha reservation, with the backing of the Smithsonian Institution. When the Bureau of Ethnology was established in 1879, he provided his services for the remainder of his life and was devoted to the collection and publication of ethnologic material with a focus in linguistic. During his life he also studied several tribes along the Oregon coast such as the Athabaskan (also called Dene), Kusan, Takliman and Yakonan.

During his last days, Dorsey fell ill with typhoid fever and passed away on February 4, 1895 in Washington, D.C.

-Only one left in condition for publication is “Siouan Sociology”

The Gentile System of the Siletz Tribes (Series 1, Box 3, Folder 8) 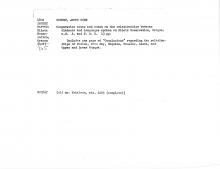 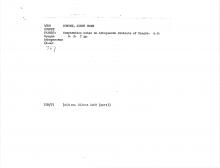 Modes of Predication in the Athapascan dialects of Oregon (Series 1, Box 3, Folder 14)